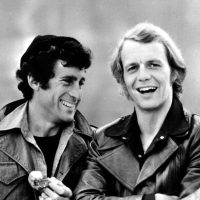 An inventory of stuff belonging to Dave Starsky and Ken Hutchinson 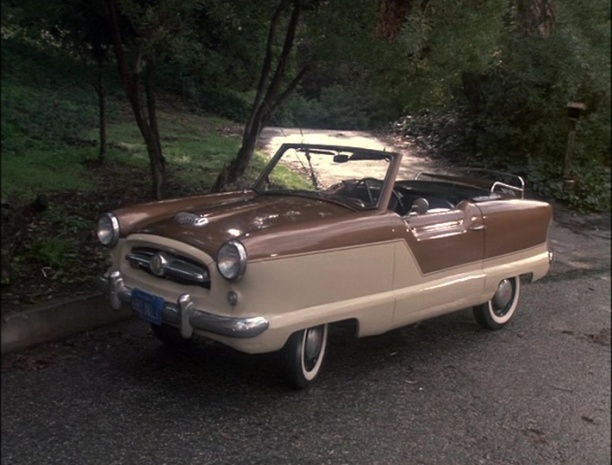 After Hutch’s latest Galaxie 500 is blown to pieces, he promptly acquires new wheels in 04-19 Targets Without A Badge, Part 2, to get around in his new, civilian existence. This little beauty is a 1955 Nash Metropolitan, and Hutch calls it “Belle” (licence plate 681 NLI). Unlike Hutch’s Galaxies, this seems to be in beautiful condition (and Hutch even polishes it a bit with his scarf).

The car remains a one-scene joke – if I’m not mistaken, it is mentioned only once after the opening scene. The reason? Starsky probably refused to be seen in this car. 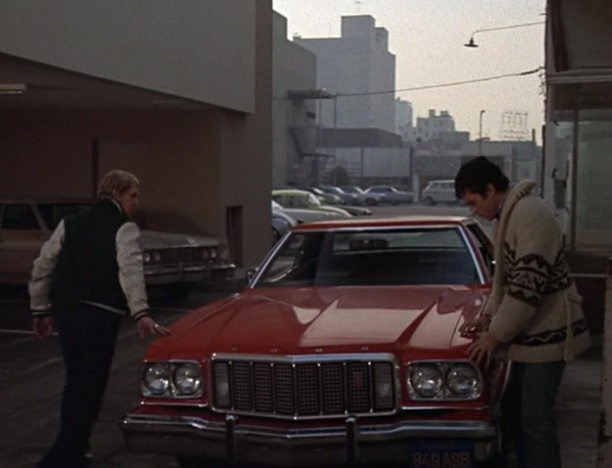 So much has been written about Starsky’s beloved, candy-apple red, white-striped, two-door Ford Gran Torino – or the “Striped Tomato” as it was nicknamed by Hutch in Snowstorm – that I’ll only list the basics here, from the in-universe point of view.

In the pilot episode, Torino’s license plate is 849 ASB; later in the show’s all four seasons it is the now legendary 537 ONN. As with Hutch’s Galaxie, I wonder if this suggests a change of cars, or simply a change in registration. 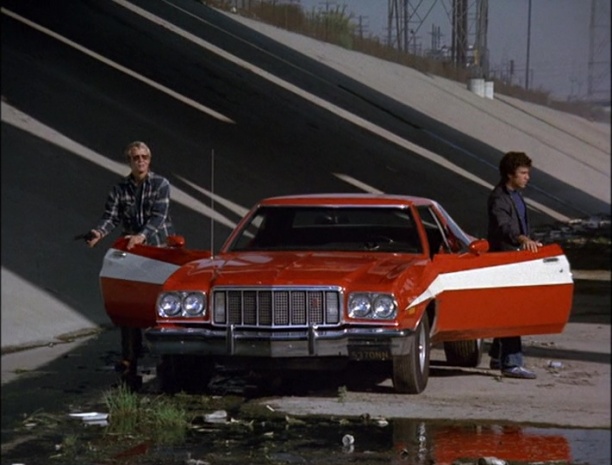 The point where Starsky necessarily has to get a new, identical Torino is between 02-18 The Set-Up (Part 2) and 02-19 Survival, or January/February 1977, as the car miraculously returns in Survival in spite of being badly burned in The Set-Up. However, this time the license plate stays the same. But surely the car wouldn’t have been salvageable after this blaze? 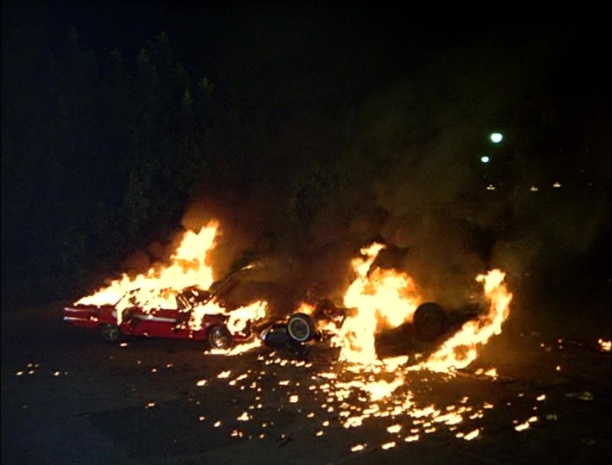 This means at least two different Torinos for Starsky, and since the real cars were 1975 and 1976 models, one could claim Starsky bought his first striped tomato very early in 1975 (the pilot is set around February/March 1975) and the second in February 1977, after the events of The Set-Up. The latter famously took some of the bullets Gunther had meant for Starsky and Hutch in the show’s finale, Sweet Revenge. Whether the Torino gets fixed or not after that has always been as important a plot point in post-series fan fiction as whether Hutch shaves his mustache or not. Which means, very important!

For car enthusiasts, starskytorino.com is a great place for further reading about the cars used in the show and the differences between them, as well as exploring several decades’ worth of Gran Torino worship, and admiring all the restored, rebuilt, or rescued cars – or why not check if there’s a Starsky car somewhere near you?

On that note, I just learned there’s one somewhere in Finland, too! Never heard of it before, but then the cars aren’t the reason I love this show so much… 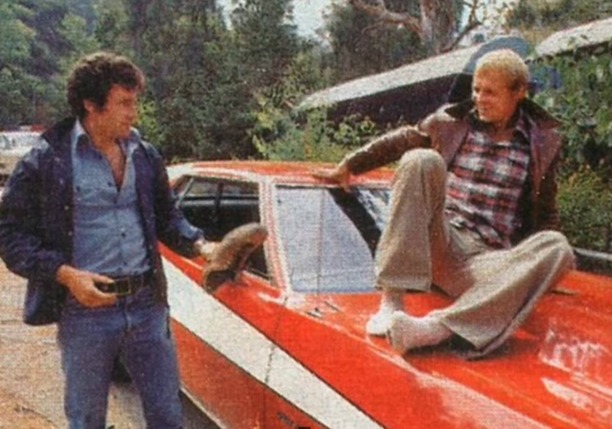 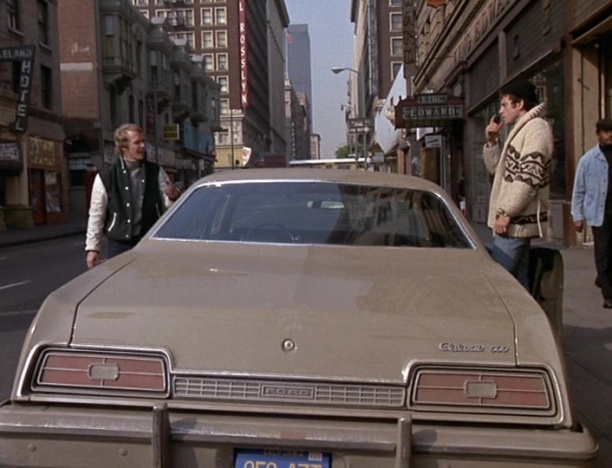 Hutch drives light brown, 4-door Ford Galaxie 500s in the pilot and in all four seasons. One often sees his car referred to as an LTD, which was a very similar Ford model – I couldn’t tell them apart if it didn’t read “Galaxie 500” on Hutch’s car! The history of the Galaxie/LTD range is a bit convoluted, but if I understood anything at all of what I’ve read online, in the early 1970s the Galaxie 500, while sold under that separate name, was simply the less (but not the least) expensive model Ford offered in (or alongside) the LTD range. Or something like that…? Can anyone clarify this? Anyway, it doesn’t sound like a terrible mistake to call Hutch’s car an LTD.

Although badly beaten and charmingly dysfunctional, in 1975 this was an almost new car – most fan sites say they used the 1973 model. It is an often told story that David Soul wasn’t happy with the idea of Hutch driving the neat new car that was provided by the production company, so he and Paul Michael Glaser took sledge hammers or crowbars to it to add some “character”. And one big dent on the roof was certainly created when Hutch landed on the roof in the pilot.

In the pilot episode, the Galaxie’s license plate is 058 AZT. In Season 1 and most of Season 2, the license plate is 552 LQD. Does this mean, in universe, that these are two different cars, or could one change the registration number for some reason? I don’t know. 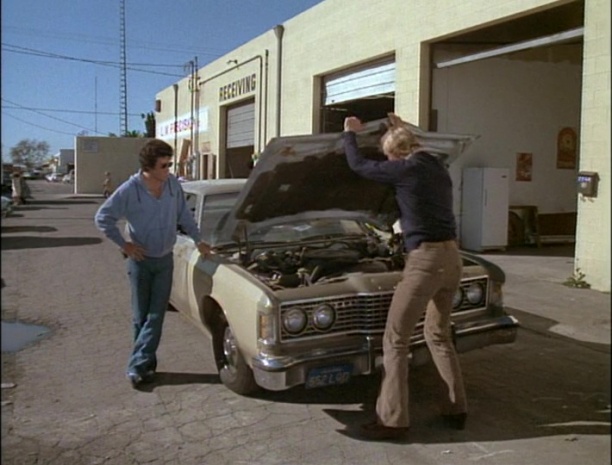 In 02-14 Bloodbath, the car got temporarily re-upholstered by Merle. Hutch didn’t like it. At all. 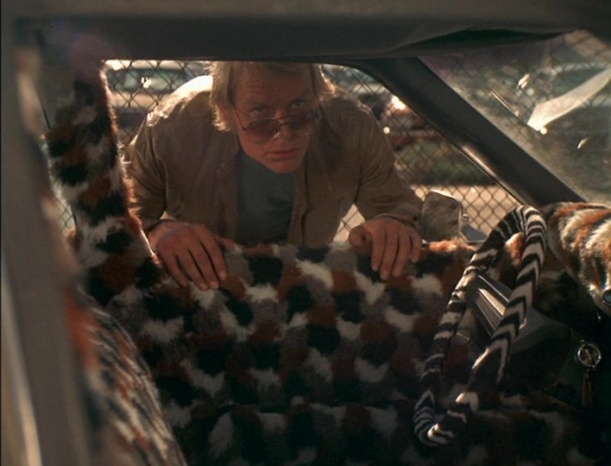 In the tag of 02-19 Survival, Starsky buys Hutch another, equally battered Ford Galaxie 500 to replace 552 LQD that rolled down the canyon in that episode. Though they technically used the same car(s), they (amazingly) paid attention to continuity and changed the license plate to 018 MEL. 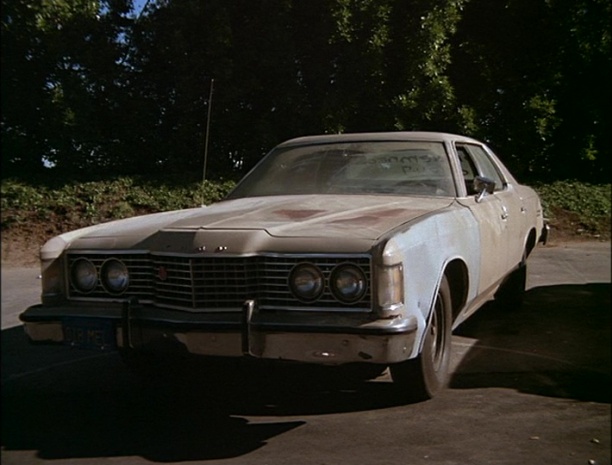 This unique individual survives until 04-18 Targets Without a Badge, Part 1, where it is blown up by Soldier. Then Hutch buys the sweet little Nash Metropolitan he names “Belle”, and officially, that’s the last we hear of Hutch’s cars.  (As the show originally aired, the Galaxie was seen again in 04-21 Starsky vs. Hutch, but it is widely agreed that the episodes were aired in wrong order. )